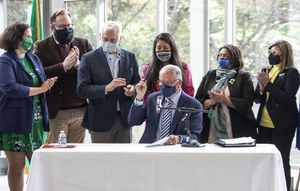 <p><p>OLYMPIA – State and local governments are taking matters into their own hands when it comes to fighting climate change.</p></p><p><p>Congress recently passed its $1 trillion infrastructure bill, which provides communities with some funding to help them be more resilient. But the fate of a larger federal spending bill, which would provide funding to mitigate climate change, is still unsettled.</p></p><p><p>Instead, state and local governments, including Gov. Jay Inslee and Seattle Mayor Jenny Durkan, are coming together this week at the United Nation’s climate conference in Glasgow, Scotland, to discuss what they can do at a local level to better prepare.</p></p><p><p>“This is our big challenge for everybody on the planet,” Inslee said Monday. “We’re not alone. We’re all in this together.”</p></p><p><p>Inslee arrived at <a href=”https://ukcop26.org” target=”_blank”>COP26</a>, the two-week conference that brings together leaders from across the world to discuss and take action on climate policy, on Saturday.</p></p><p><p>Although Inslee praised the passage of Congress’s $1 trillion infrastructure passage, he told reporters Monday he and the other governors were being more ambitious.</p></p><p><p>One way he was doing that was by pledging Sunday that Washington’s public vehicle fleet will be fully electric by 2040.</p></p><p><p>Inslee’s executive order requires all state executive and small-cabinet agencies to fully transition their vehicles to electric. It gives a timeline for agencies to transition, requiring all light-duty vehicles to be electric by 2035 and all medium- and heavy-duty vehicles to be electric by 2040. Agencies can replace old vehicles once they come to “the end of their useful life,” according to the order.</p></p><p><p>Inslee called a 100% zero-emission vehicle “the new secret weapon” in the fight against climate change.</p></p><p><p>Each agency is required to develop an implementation plan, including a fleet replacement schedule, a program management plan and funds needed to do so.</p></p><p><p>Inslee did not have a cost available Monday but said switching to electric would end up being “much, much cheaper” because it would save on gas. He said the next step is getting charging stations near schools, businesses and in houses across the state, especially in parts of the state that don’t have them, such as Eastern Washington.</p></p><p><p>Earlier this year, the Legislature passed a bill that had a requirement to make all new cars in the state electric beginning in 2030. Inslee vetoed that section of the bill as it was contingent on a road user fee for most vehicles.</p></p><p><p>In the veto message, Inslee said the goal of 100% electric vehicles is “too important to tie to the implementation of a separate policy like the road usage charge.”</p></p><p><p>While in Glasgow, Inslee also partnered with other Pacific Coast leaders to launch a Low Carbon Construction Task Force between California, Oregon, Washington, British Columbia and the cities of Vancouver, Seattle, Portland, San Francisco, Oakland and Los Angeles.</p></p><p><p>The group will create a regional strategy to accelerate investment and development of low carbon materials to be used in buildings across the region, according to a news release from the governor’s office. Buildings are responsible for nearly 40% of carbon emissions globally each year, according to <a href=”https://architecture2030.org/our-mission” target=”_blank”>nonprofit Architecture 2030</a>.</p></p><p><p> Durkan said the collaboration will allow local governments to lower carbon emissions and combat climate disasters.</p></p><p><p>“Local governments are also the first to face the devastating effects of climate change,” Durkan said in a statement. “Our communities are on the front lines of extreme heat waves, devastating fires, and withering droughts.”</p></p><p><p>Oregon Gov. Kate Brown said in a statement that implementing a low-carbon building standard can fight climate change and grow the economy at the same time.</p></p><p><p>“We’ve seen firsthand how using low carbon materials can improve efficiency in local manufacturing and create cost savings for manufacturers,” Brown said.</p></p><p><p>Inslee will be in Glasgow until Thursday.</p></p>

← Lorde Shares ‘Hold No Grudge,’ ‘Helen Of Troy’ From Deluxe Edition Of ‘Solar Power’
Buy me some peanuts and Cracker Jack and $23 million in stadium upgrades →