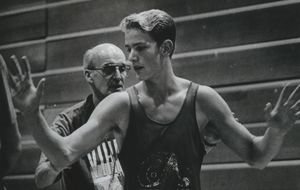 <p><p>Donald Haynes, a North Idaho hall of Fame high school basketball coach and teacher, passed away on Tuesday in Sandpoint at the age of 91, Sandpoint athletic director Kris Knowles announced on Wednesday.</p></p><p><p>Haynes had a 40-year head coaching career beginning in Kellogg in 1961, with stops in Moscow, Twin Falls, Meridian, Centennial and Coeur d’Alene along with stints in Oregon and Washington.</p></p><p><p>He retired permanently in 2001 from West Linn (Oregon), where he was coaxed out of retirement, won the league and eclipsed the 500-win mark.</p></p><p><p>Haynes coached at Lewis and Clark for three seasons from 1975-78, where he went 44-27 with a first- and second-place finish in the last two years of the City League.</p></p><p><p>His 1983 state championship team at Meridian was named the “Greatest High School Basketball Team Ever” for Idaho by MaxPreps.</p></p><p><p>Haynes returned to Coeur d’Alene to coach his alma mater in 1988 and made three consecutive trips to state his last three years.</p></p><p><p>Haynes won 510 career games with four Idaho state titles and was inducted into <a href=”https://nihof.org/inductee/donald-haynes/” target=”_blank”>the North Idaho Athletic Hall of Fame in 1994</a>.</p></p>