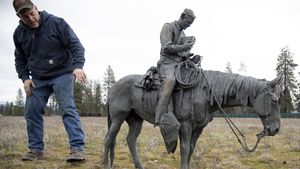 <p><p>A lost cowboy was headed home Tuesday morning.</p></p><p><p>“Holy smokes,” Matt Copenhaver said, lifting the bronze sculpture dedicated to his late father from where it rested in a field 70 miles from its last known location in Creston. “It’s a little worse for the wear.”</p></p><p><p>Linda Foulger was out for a morning walk when she found the statue lying on its side in a field behind the Yoke’s grocery store off Highway 2 in Mead. She’d noticed it the night before, but returned to the spot during the daylight.</p></p><p><p>“It looked like a wagon with something in it,” Foulger said. Recognizing it might be stolen, she called law enforcement and Googled any missing statues in the area. <a href=”https://www.spokesman.com/stories/2021/dec/01/stolen-statue-of-praying-cowboy-near-creston-promp” target=”_blank”>She found an article in The Spokesman-Review</a> from Dec. 1 and contacted the newspaper about her discovery.</p></p><p><p>The statue was cast by Deborah Copenhaver-Fellows in honor of her father, Washington rodeo legend Deb Copenhaver. Deb Copenhaver built the roadside chapel in Creston where the statue stood until late last month, when it was ripped from its pedestal.</p></p><p><p>Deb Copenhaver <a href=”https://www.legacy.com/us/obituaries/spokesman/name/deb-copenhaver-obituary?id=13091043″ target=”_blank”>died in 2019 at age 94</a>.</p></p><p><p>“This is the best Christmas present ever,” Copenhaver-Fellows, who also sculpted the Bing Crosby statue on Gonzaga University’s campus and the Vietnam veterans memorial in Riverfront Park, said by phone Tuesday morning.</p></p><p><p>She suspects the attention the theft received may have convinced the thieves to unload the statue.</p></p><p><p>“I think the Holy Spirit got to them,” Copenhaver-Fellows said.</p></p><p><p>Foulger was walking in the field behind the Yoke’s in Mead as part of physical therapy following a series of car crashes that caused her to lose her job as a carpenter.</p></p><p><p>“Helping someone else, it feels good,” Foulger said.</p></p><p><p>Matt Copenhaver, Deb’s son, and his own son, Beau, traveled by truck from Lincoln County to recover the statue from the field Tuesday.</p></p><p><p>“He’s back,” Copenhaver said. He noted some damage across the praying cowboy’s flank that could have been caused by a strap, and a bent rein for his horse, but other than that the piece appeared in good shape.</p></p><p><p>“I thought for sure that whoever took it broke it up for the bronze, you know?” Matt Copenhaver said. He kept circling the piece Tuesday morning, occasionally saying, “unbelievable” and “unreal.”</p></p><p><p>Lincoln County Sheriff Wade Magers called Foulger personally to thank her for the discovery. He said deputies would contact local businesses to see if there was any video footage that might show who made off with the statue and then dumped it in the field.</p></p><p><p>Foulger, who lives in a travel trailer nearby, said it’s typical for people to drive and walk through the undeveloped field behind the store.</p></p><p><p>“We didn’t think we’d ever see that again,” Magers told Foulger.</p></p><p><p>“I’m glad you will see it again,” she responded.</p></p><p><p>Matt Copenhaver said he’d leave the decision to his sister whether to return the piece to its former pedestal at the roadside chapel.</p></p>